U bent hier: Home » About polo

Officially an unboarded field measures 180 x 275 meters long. But in reality polofields in The Netherlands are typically at 70% size like we have at the Royal Polo at ‘Het Loo’
The goals are placed on the end lines midway between the side lines. The posts are placed twenty-four feet apart, are ten feet high, and are made of materials light enough so that they will break in case of a collision. 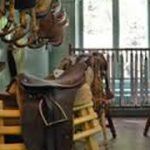 The ball is made of light wood, usually willow, with no covering but white paint. It is 3 1/ 4 inches in diameter and weighs 5 1/2 ounces. The polostick or mallets are made of bamboo canes, or poly resins, which provide flexibility, and the mallet heads of willow or maple. The mallets come in lengths of 49 to 53 inches and selection is made according to the height of the pony being played. The ball is struck with the side of the mallet, not with the end. All players must wea ra protective helmet with a chin strap and preferably a faceguard. Knees are protected with leather knee guards. The ponies are provided with protective bandages or wraps on all four legs. Tails are braided, taped or tied to minimize interference in making the various shots. Several mounts are required for each player in a game, each horse usually being played only one period. 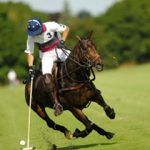 The Polo Pony is an object of admiration. He is selected for his ability to carry weight at great speed, and for his endurance. Many Thoroughbreds or three-fourth Thoroughbreds are used. A pony’s training must make him agile and responsive to every command and impulse of the rider. He becomes so familiar with the various shots and maneuvers that he can often anticipate his rider’s wishes. Action of horse and rider alike must be instantaneous to be effective. Thus the pony becomes a player in the game. 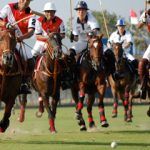 Also called a period. There are four chukkers in a polo game, each lasting 7 minutes plus up to 30 seconds in overtime. If, during the 30 seconds, the ball hits the sideboards or goes out of bounds, or if the empire blows his whistle, the chukker is over. There is no overtime at the end of the sixth chukker unless the score is tied, at which time a seventh period of “sudden death” will be played. A player returns to each chukker on a different pony, although he may rest a pony for a chukker or two and play the same pony again. 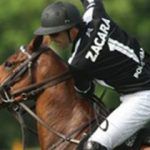 Each player is rated on a scale of minus 2 to 10, by regional and national handicap committees. A player’s handicap is based on his net worth to his /her team with factors considered such as horsemanship, team play, hitting skills, anticipation and overall understanding of the game and it’s rules. The rating given to players is termed in “Goals”. For example, if 4 three goal players formed a team, it would be a 12 goal rated team. If the opposing team handicap totalled 10 goals, there would be a one goal advantage (difference in goals divided by 2) to the 10 goal team at the start of the game. The term ‘Goals’ is not a player’s rating and is not be be confused with how many times he/she will score in a match, it is just a matter of a rating system 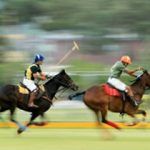 When a foul has been committed, penalty shots are awarded by the umpires to the team which has been fouled. The most important rules in polo are those concerning the safety of men and horses. Chief of these are the crossing and riding-off rules. No player may cross the line of another in going for the ball, and the last man to strike the ball has the “right-of-way”. Others may legitimately “ride him off”, however. This means impinging, pony to pony, on a converging course in the manner of a shoulder charge in football.